Nine-year-old, but not his mother, left off list of citizens published in Assam crackdown 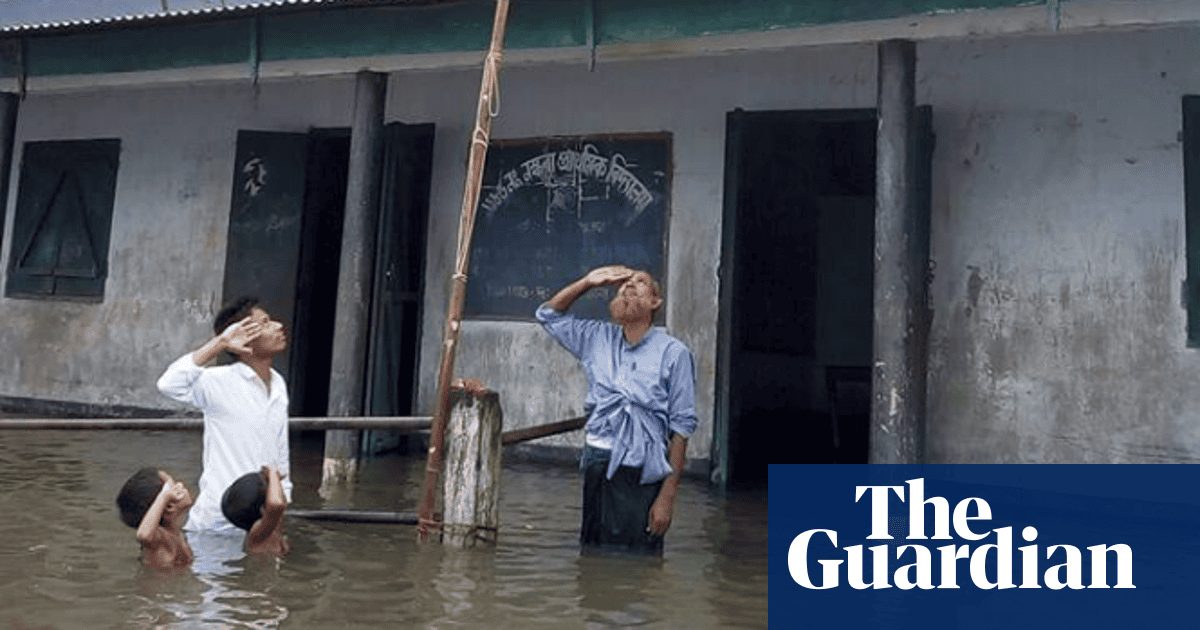 A child who appeared in a photograph that went viral last year saluting the Indian flag in chest-deep flood water has been declared a foreigner and could be deported as part of a government drive to root out illegal immigrants.

Haider Ali Khan appeared in a photograph with his teacher and two others on 15 August last year, Indias 70th independence anniversary, showing the group saluting the Indian tricolour.

Their north-eastern Indian state, Assam, was severely flooded at the time and water reached to the chests of Khan and a student beside him.

The picture was broadcast across the media and widely shared online as an example of Indian resilience and pride.

One year later, Khan is fighting to prove he is Indian and avoid deportation to Bangladesh.

The nine-year-old is one of 4 million people in Assam whose names failed to appear in a draft list of citizens published on 30 June this year.

Every Assamese resident was asked to produce identity documents to be included in the list, which was the product of a four-decade-old campaign against illegal migrants in the state.

Assam shares a 165-mile (270km) border with Bangladesh and at least hundreds of thousands of Bangladeshis are thought to have crossed into the state and settled there since Partition in 1948.

Khans teacher, Tajen Sikdar, who also appears in the photograph, said this week the boy had submitted legacy data to the government proving he was a citizen.

His mother, brother and other relatives relied on the same documents and were included on the draft list. But Khan was left off, and now must apply to appeal against the decision through a special tribunal.

State officials have warned anyone whose name does not appear on the final list the publication of which is yet to be announced could lose any government benefits or rights to work and property and may even be deported.

Whether India could actually deport significant numbers of people is unclear: it has no repatriation treaty with Bangladesh and Dhaka insists the process is an internal Indian matter.

Resentment of Bengalis, who are often Muslim, grew rapidly in Assam after a surge of Bangladeshi refugees fleeing the countrys 1971 liberation war. The citizenship verification drive was ordered decades ago but governments only paid lip service to it until 2014, when the supreme court ruled the process must begin.

Though cases such as Khans have raised questions over the thoroughness of the process, Hindu nationalist figures such as the president of the ruling Bharatiya Janata party, Amit Shah, have argued for a citizenship drive to also be carried out in neighbouring West Bengal state.

Aman Wadud, a lawyer who has represented many of those declared foreigners by the Assamese authorities in recent years, said there was significant uncertainty over what would happen to those whose names were missing from the final list.

Those whose names are not there are very curious as to why, he said. I dont think theres any chance of deportation right now, but the supreme court will decide the timeline for the final list and probably what happens to those not on it.

Assam has long sought to preserve its ethnic identity, but rendering millions of people stateless is not the answer, said Meenakshi Ganguly, the south Asia director at HRW.

Indian authorities need to move swiftly to ensure the rights of Muslims and other vulnerable communities in Assam are protected from statelessness.

To find the one that’s gold

People Are So Friggin Cool – Video